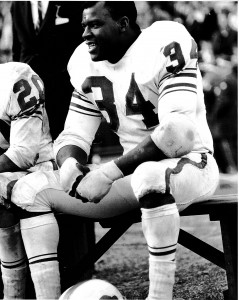 Cookie Gilchrist is a magical name. In the world of professional football his feats of strength and courage are legendary. In the minefield that was the 1960’s civil rights movement, his ability to stand up for himself and his people in the face of authority gave hope to thousands, if not millions of African-Americans. His story could be compared to the folklore legend of the great John Henry, who used his great hammer and prodigious strength to beat out the steam engine that was replacing the hardworking railroad workers. Cookie used his strength and strong will to secure his place not only in the football record books, but in American history as well.

Carlton Chester “Cookie” Gilchrist was born on May 24th, 1935, in Brackenridge, Pennsylvania, to Rose and Otto Gilchrist. His entry into the world should have been an indicator that he would grow to be larger than life when he weighed an even 13 pounds at birth. The delivering physician was named Chester, and the baby was given that middle name in honor of the doctor. As a child young Carlton showed a love of sugary foods and thus, the nickname “Cookie” was born.

As a star for the Har-Brack High School football team, Cookie caught the eye of legendary coach, Paul Brown, of the Cleveland Browns. Cookie was an impressive specimen on the football field at 6’3” and 253 pounds. In the summer between his 11th and 12th grade years, Coach Brown offered Cookie $5000.00 to play for the Browns. This was a great sum of money and in an effort to help his family, Cookie passed on the 108 college scholarships he had been offered, and signed a contract to play professional football for the Cleveland Browns. While in training camp with the Browns it came to the attention of NFL Commissioner, Bert Bell, that Cookie was not yet eligible to play in the NFL, based on the league’s age requirements. This left Cookie in a state of limbo. His contract with the Browns was voided by the NFL, yet he was unable to accept any of the previously-offered college scholarship because of his short-lived status as a professional athlete. Realizing his great potential, Coach Brown tried to hide Cookie on the practice squad until he became old enough to play in the NFL, but the young running back felt betrayed by Brown and decided to try his luck playing football in Canada where he was not bound by age requirements.

At the time in his life when he should have been preparing for his senior year of high school, Cookie Gilchrist was instead becoming a star runner for the Sarnia Imperials, playing against older competition in the Ontario Rugby Football. He dominated his rookie season, winning the league rushing title and the team MVP award. Cookie played one more year in the Ontario Rugby Football League playing for the Kitchener-Waterloo Dutchmen. He led the Dutchmen to the league championship and was named a league all-star.

In 1956 and 1957, Cookie played halfback for the Hamilton Tiger-Cats of the Canadian Football League, and led the Cats to victory in the 1957 Grey Cup with his two-touchdown championship game performance. Cookie played one year in Saskatchewan and three more in Toronto before ending his days in the CFL. 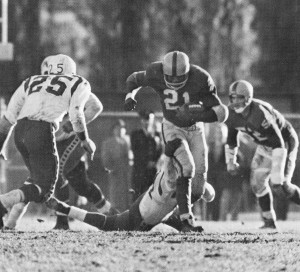 While in Canada, Cookie played halfback, defensive-back, linebacker and place kicker, and was a perennial all-star and league leader in all of the major statistical categories. He enjoyed life in Canada. He felt that Canada was slightly more progressive than the United States in terms of race relations, but felt that his coaches and the team’s management did not appreciate him and his contributions on the field. Due to these issues, Cookie changed teams frequently before ultimately deciding to leave the CFL for the new American Football League, and an exciting new chapter in his story.

The fall of 1962 found Cookie Gilchrist in the employ of the Buffalo Bills of the American Football League. Cookie hit the ground running and was the first 1000-yard rusher and league MVP. In 1964, Cookie led a star-studded Buffalo Bills team that included Jack Kemp, Billy Shaw, Booker Edgerson and many more, to the American Football League title with a victory over the Chargers in the championship game.

Cookie came of age during those first years with the Bills and began to use his celebrity status on the football field to become a leader in the civil rights fight of the 1960’s. He took part in many civil rights events, including the 1963 march on Washington led by Dr. Martin Luther King Jr. It was during this march for better jobs and freedoms for African-Americans that Dr. King gave his famous, “I Have a Dream” speech. Cookie was also an advisor to Muhammad Ali when he was blacklisted for being a contentious objector to the Vietnam War. But despite being a member of these historical events, many say the most important event that Cookie took part in during the civil rights movement, was leading the boycott of the AFL all-star game in New Orleans in January 1965. The African-American athletes, unable to get taxicabs and service in many establishments in New Orleans, boycotted and forced the game to be moved to Houston. This critical action was a major catalyst that led to the desegregation of New Orleans. The boycott also served as the inspiration for the 1968 Olympic project for human rights, which called for an African-American boycott of the Olympic games in Mexico.

Cookie Gilchrist played three more seasons in the AFL, spending time with the Denver Broncos. These seasons brought one more rushing title (1965) and one last all-star appearance. After an injury-shortened 1967 season with Denver, Cookie was claimed in the 1968 expansion draft by the newly-formed Cincinnati Bengals, who just happened to be owned and coached by Paul Brown. Cookie decided to retire rather that play for Coach Brown, who he felt stole his educational opportunities by illegally signing him out of high school. 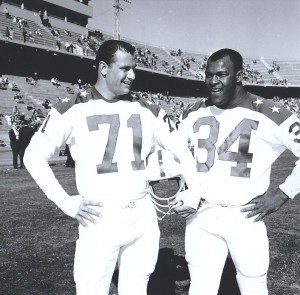 Retirement came only on the football field, because Cookie became immediately involved in the entertainment industry and fighting for players rights. Cookie tried his hand in Hollywood by guest starring in several episodes of the Beverly Hillbillies, and began promoting concerts. The concerts raised funds for the United Athletes Coalition, an organization that Gilchrist formed to ensure that players’ rights were not infringed upon, and to help them transition into retirement.

Cookie Gilchrist’s life and football career were both grand in scale. He amassed 10,955 rushing yards, 2,203 receiving yards, 12 interceptions and 96 career touchdowns, along with 11 all- star designations, two rushing titles and three league championships. Despite setting numerous records and receiving numerous accolades, Cookie Gilchrist was most proud of leading the boycott in New Orleans, and his civil rights work.

In folklore John Henry died after swinging his hammer beyond the point of exhaustion in his race against the steam engine. Cookie swung his hammer again and again, both on and off the football field. Cookie took his last swing on January 10th, 2011 when he passed away, and like the fictional John Henry, he too won his race and set that heavy hammer down.